A number of startups are currently working on the development of computer chips to be implanted in people’s brains. For example, there is the perceived omnipresent Elon Musk with his startup Neuralink. He has now announced that he will be carrying out the first trials of his brain implants on humans in the next 6 months. Currently, the company is waiting for the green light from the U.S. Food and Drug Administration. Previously, implanted monkeys were able to play simple video games using only the power of thought.
Musk hopes to use the brain-computer interfaces created in this way to cure neurological diseases in the future. In addition, Neuralink is working on other implants that can be placed in the spinal cord or eyes to restore mobility or vision.
But Neuralink is not the only company actively advancing such brain-computer interfaces (BCI). Just recently, Amazon founder Jeff Bezos and Microsoft founder Bill Gates invested in startup Snchron. The company aims to help paralyzed people communicate with its brain implant by allowing them to control a PC’s mouse pointer with their thoughts. Here, there are already two patients wearing the BCI in their brains and thus participating in trials for the FDA. The special feature here is that no brain surgery is necessary for implantation. The chip is inserted into the jugular vein much like a coronary stent and then moves through the bloodstream into the brain.

BCI chips can be used by more than just multimillion-dollar companies. There is already an open-source extension for the popular “Raspberry Pie” tinker computer, and so it could soon be possible for everyone to control computers with their own thoughts. 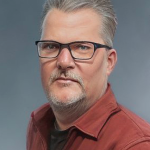 Expert for digitalization in nursing care

The registered nurse has worked for more than 20 years in hospitals in nursing, nursing management, nursing informatics and in the project management office. He successfully completed two master’s degrees in the field of health IT and health information management and then moved to the industry.

Pills from the 3D printer should improve therapy

The competition between startups for patients’ brains

Pills from the 3D printer should improve therapy

Bavaria invests €4.74 million in research on robots in nursing care

The Road to the Digital Nursing Future: Interoperability and Telematics Infrastructure are the Keys to a Continuity of Care in Nursing